For the development of various lighting concepts, Bert Wouters asked SKM to create working demo models. Do you have the well-known colorful sustainable Hue lamp at home? The first series was made at SKM.

SKM founder Rudolf van Kersbergen was at the start of Bert Wouters’ career. Rudolf taught him the trade of modeling at Philips in 1986. Today Bert is an engineer at Signify and works on innovative lighting concepts and still collaborates with SKM. ‘We can basically make everything ourselves in our innovation lab, but some elements are so specific or high-end, that they require good tooling. That’s when I reach out to SKM.’

And years later, SKM is the founding father of the well-known Hue lamps. With this smart LED-technology, you can control several lamps at the same time via a smartphone or tablet and adjust the color. There is a complex technology behind it. Bert explains: ‘Hue uses an LED-lamp. That LED-lamp flows heat, which can have an impact on the color. With the models made by SKM, we were able to extensively measure and test the light conductivity during the product development phase. The SKM models have contributed enormously to the further development of a concept into a real product!’

Do you have a great concept? We can help you on your way!

Would you like to have a demo model made of your concept, so that you can test your idea? Then contact SKM!

After a long career in the tobacco industry, Jos van Esch wanted to do something good for society. He develops Meds Safe with his company ReMediZ. A medicine safe that stores medicines under perfect conditions, so that unused medicines are no longer wasted. He asked SKM for the development of the first series.

‘If medicines don’t work or if the side effects are too severe, a treatment is often stopped,’ explains Jos. ‘The leftover medicines go back to the pharmacy and are destroyed. We wanted to change that. Our Meds Safe is a medicine safe with perfect storing conditions. Each medicine has its own serial number. When a medicine is not used, it can be returned to the pharmacy so that it can be reissued. In this way we reduce medical waste, medicines can be reissued and you prevent medicine residues from unnecessarily polluting the environment.

Jeroen and Dirk truelly collaborated with us for the Meds Safe plastic casting. They have an enormous amount of material knowledge and know the hardness, resilience and flexibility of plastic like no other. They brainstorm with you about the entire development process. You never have the feeling that you are talking to a salesperson. At SKM you collaborate with experts and that is what I need for the development of my product!’

Helmond is the place where innovation happens. At the Automotive Campus, the Lightyear One is being finalized. An electric car on solar energy with a range of no less than 725 kilometers. SKM recently made the hubcaps for the most recent test model.

Its unique vehicle architecture and technology have been developed in Helmond with high efficiency in mind, allowing Lightyear One to consume only 83 Wh/km — two to three times less energy than any other electric vehicle on the market today. This results in an exceptional range of 725 km (WLTP) with the lowest emissions, the lowest charging frequency and 7,000 to 20,000 kilometres of free, effortless and clean solar range every year.

For the hubcaps, the car manufacturer approached SKM. Project leader Jeroen Mertens explains: ‘To guarantee the highest quality, we printed the master model in a vertical position and in two parts. These parts are glued and seamlessly finished. The molds are reinforced with steel tubes to prevent sagging of the mold (under its own weight). This guarantees that the product also gets the right thickness.’ After the parts had been cast, the hubcaps were painted in a satin gloss and the high-gloss silver and black accents were applied. The result? Highest quality hubcaps for the car of the future.

Keep a close eye on Helmond’s roads, the Lightyear One will be on the market in 2022!

“Our customers want to drive a classic car, preferably with some extra comfort and safety. They come to us for electric power steering,” explains commercial director Roger. “50s and 60s cars, like the Maserati 3500GT, often have a quite large steering wheel because the driver needs leverage to turn the wheel without power steering.” People are getting taller and that makes getting in and out of the car more difficult when there is little legroom. “Customers with long legs sometimes even hit the back of the handlebars with their knees when they kick in the clutch. That is why we asked SKM to scale down the Maserati steering wheel for us, because in combination with the power steering, the large steering wheel is no longer necessary.” 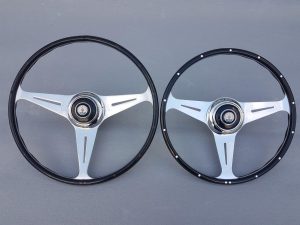 “The biggest challenge with the Maserati 3500GT steering wheel was the white caps that cover the small screws,” explains technical director Ruud. “On the original steering wheel, the last remaining caps were discolored. To see what the smaller steering wheel and the new caps would look like, SKM first made a 3D print. Only when it was completely right SKM made a mold to cast the steering wheel.’ The first steering wheel with a diameter of 38 centimeters was an immediate success. Then they received requests for the small replica wheel, but to the surprise of both directors, also for the larger wheel. That is why SKM also developed the original 41 cm diameter steering wheel of the Maserati 3500GT for EZ Powersteering. SKM made 10 different models and hundreds of steering wheels to date. “When I was looking for a 3D rapid modeling company 10 years ago, I didn’t know whether you could exactly scale down a classic steering wheel without compromising on the design,” concludes Roger. “SKM has proven with their knowledge and expertise that this is certainly possible!”

Less than 500 meters from SKM, Altran Engineering develops an innovative autonomous shuttle in commission of 2getthere. What you can’t see from the outside is SKM’s contribution to the interior of this smart mobility solution. Han van der Weerden,

buyer at Altran, asked SKM to create various interior parts of the shuttle.

Han has been working with SKM since 1985 for prototypes and small series of automotive solutions. The collaboration intensified in 2016 with the production of 2getthere’s autonomous shuttles. “We also call these vehicles ‘people movers’. In these 6-metre-long minibuses, 22 people can be transported completely autonomously. So without a human driver. The shuttles are automatically recharged via the ‘charging plate’ under the shuttles when passengers board and disembark.”

The vehicle looks sleek on the outside. “But inside the shuttle is full of sensors and electronics”, Han explains. And inside of the vehicles is where SKM’s contribution can be found. “SKM has made various interior parts for us to protect the electronics. For example, for the light box that displays the final destination, SKM made the hood that protects the inside.” Most hoods and covers are made using stereolithography (SLA) in Xtreme material. But selective laser sintering (SLS) was also used for printing the interior parts.

The first 6 shuttles are now driving around the Rivium business park in Gouda. Han can already share that a new series of smart vehicles is on its way. “With the acquisition of 2getthere by ZF, there are plans to produce the shuttles on a larger scale.”

As SKM, we are happy to contribute again to these future shuttles!